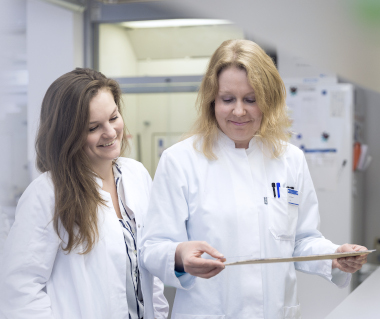 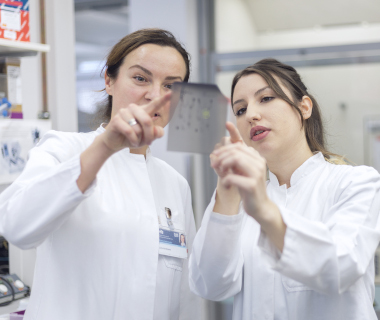 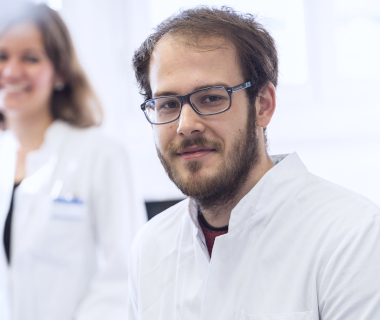 We are a young laboratory focusing on a translational research approach on Barrett's Esophagus and esophageal adenocarcinoma, and the impact of gastrointestinal stem cells on inflammation induced carcinogenesis. We are working to facilitate the clinical realization of basic science principles in order to improve the care and treatment of esophagus cancer patients and the surveillance of patients with Barrett's Esophagus.

Barrett’s Esophagus (BE) is a premalignant condition of the esophagus defined by replacement of the normal squamous epithelium in the esophagus by columnar epithelium, typically with intestinal metaplasia. The development of Barrett’s esophagus represents the initial step in the histopathologic progression to low grade dysplasia, high-grade dysplasia, and esophageal adenocarinoma (EAC). The incidence of EAC, which comprises both esophageal and junctional origin, has increased at a rate of 4 to 10 % annually, an increase greater than that of any other cancer. BE and EAC are strongly associated with gastroesophageal reflux disease (GERD), and BE is present in 10 % of patients referred for GERD. GERD is thought to induce a chronic inflammatory condition of the esophagus known as reflux esophagitis, and thus chronic inflammation is thought to be one of the primary mediators of both BE and EAC. The link between inflammation and cancer is now well established, and while the mechanism is not been completely understood, it is clear that inflammatory cells release a variety of mediators that together establish an inflammatory and pro-carcinogenic microenvironment.

EAC is rapidly rising in the Western World and now accounts for at least 2 % of all cancer-related deaths, but does not develop in every patient with BE, and only over decades through progression through a sequence metaplasia to low-grade/high-grade dysplasia and carcinoma. A major limitation to the study of EAC in the past has been the absence of trackable and genetically modifyable models of BE. During my postdoc I developed the L2-IL-1b transgenic mouse model of BE and EAC. The Lab will further validate the pathogenesis of BE and EAC. Knowledge about the origin of BE and pathways driving its progression will be valuable for BE diagnosis as well as the development of novel therapies for the prevention of BE and EAC.

In most tissues, stem cells within a niche are assumed to be present in relatively small numbers. These cells are thought to remain largely quiescent or undergo division at a very slow rate, such that they are generally negative for most proliferation markers. Typically, proliferation markers such as Ki67, proliferating cell nuclear antigen (PCNA) or 5-bromo-2-deoxyuridine (BrdU) will label transit-amplifying progenitor cells, which are immediate descendents of stem cells and are located adjacent to the stem cells.
The initial location for the intestinal stem cell was deemed to be position +4 (+4 label-retaining cell [LRC]) based on the presence of slowly cycling cells at the fourth cell position from the bottom of the crypt that show label-retention of BrdU after long term administration of BrdU and long cessation time to wash out ht BrdU in the fast dividing cells which have to be replaced by the quiescent stem cell once a while. However, other studies suggested that basal crypt cells, known as crypt base columnar cells (CBCs), could also be stem cells. LGR5, a leucine-rich orphan G protein-coupled receptor, was identified in lineage tracing studies to specifically label stem cells in the mouse small intestine in the CBC cells between the Paneth cells, which seem to function as the niche cells. Thus, these rapidly proliferating cells with intestinal stem cell characteristics have challenged the previously held belief that all adult stem cells are generally quiescent or slowly cycling.
A promising new putative stem cell marker, doublecortin CaM kinase-like-1 (Dclk1), a microtubule-associated kinase that is known to be expressed in neurons, was discovered in gut epithelial progenitors in the intestinal stem cell zone (+4 LRCs) and observed stem cell apoptosis and mitotic Dclk1-expressing cells 24 hours after irradiation, indicating the importance of these cells for tissue renewal. The existence of active dividing and quiescent cells meeting criteria of stemness has raised the model of two types of intestinal stem cells: quiescent stem cells at the traditional +4 locations in a prolonged quiescent state and the active Lgr5 positive stem cells.

In the gastric corpus and cardia, cells are thought to migrate bidirectionally from the isthmus to differentiate into gastric surface mucus cells that coat the gastric pits, and gastric parietal and zymogenic cells that comprise the base of the gland. A corpus and cardia stem cell has not yet been identified, as none of the markers discussed above, with the exception of DCLK1, labels any specific cells within the gastric isthmus. Interestingly, LGR5 shows lineage labeling in some antral gastric glands and therefore might mark the antral stem or progenitor cells but can only be found in the mouse fetal cardia with occasional lineage tracing in the adult cardia. Additionally, progenitor cells, such as Krt19+ and TFF2+ cells have been shown through lineage tracing studies to label different gastric progenitor cells. Typically, columnar metaplasia is positive for TFF2 and Krt19, and the non-goblet cell metaplasia resembles TFF2+ pyloric metaplasia. Given that intestinal metaplasia also arises in the gastric mucosa, it is plausible that a similar stem cell could give rise to IM in the esophagus.

CAFs and MSCs in the Tumor Microenvironment 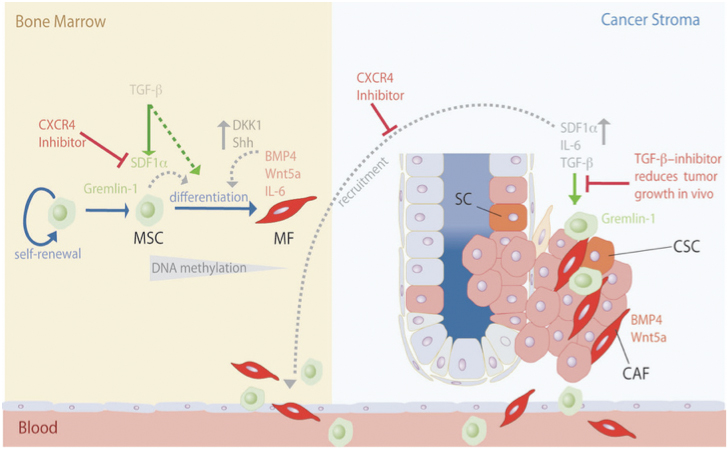 Understanding the role of cancer-associated stromal myofibroblasts (CAFs) in tumor progression has become a major research emphasis in our lab. The presence in carcinomas of large numbers of myofibroblasts originally suggested the concept of cancer as a non-healing wound, and a number of observations have now implicated these cells as contributing to cancer growth, invasion and metastasis. Tumors consist of many cell types, including cancer cells and diverse stromal cells that constitute the tumor microenvironment and contribute to tumor progression. The stromal microenvironment of tumors includes a mixture of hematopoietic and mesenchymal cells, the latter of which is comprised mostly by cancer-associated fibroblasts (CAFs), a cell type that closely resembles normal myofibroblasts (MF) present in the gastrointestinal mucosa. However, functionally, CAFs behave quite differently from MF, and clinical evidence supports the notion that stroma cells contribute in important ways to the development of a wide variety of malignant tumors. Tumors that have a desmoplastic stroma, consisting of more stromal cells disrupting the tissue homogeneity, often have a poorer prognosis.

Cancer-associated fibroblasts (CAFs) are usually considered to be activated fibroblasts that express aSMA. In normal gastrointestinal stroma, fibroblasts are usually quiescent and characterized by expression of vimentin and collagen but not aSMA, while CAFs usually express aSMA, vimentin, and FSP1, and appear to be activated and highly proliferative.  Since CAFs have altered biology compared to normal MFs and seem to accumulate in tumors, a number of studies have explored their origins. Sources that have been considered include resident fibroblasts, smooth muscle cells, endothelial cells, epithelial cells (through EMT), fibrocytes and recruited BM-derived cells (BMDC) such as MSCs.  MSCs are defined as multipotent stem cells that contribute to normal bone, adipose, cartilage and muscle. MSCs originate in the BM but can be found throughout the body; they are often involved in tissue remodeling after injury or chronic inflammation. MSCs are among the BM-derived cells that have been shown to be recruited to tumors and to promote their growth.  Interestingly, they appear to be relatively easy to culture when grown in low serum media on plastic dishes.  Previous studies have suggested that MSCs can be induced to differentiate into CAFs, particularly when exposed to tumor-conditioned media.

We recently demonstrated that a significant percentage of CAFs in inflammation-associated gastric cancer originate from MSCs and that MFs contribute to the normal stem cell niche in the BM. MSC give rise to their own niche cells, which might apply to other stem cell niches. In inflammation-induced cancer progression MFs increases in the BM niche and blood during progression to dysplasia. Therefore, we propose a model in which the earliest stages of tumor development are characterized by remodeling of the BM, followed by relocation of the MSC-CAF stem cell niche to the tumor site where it promotes tumor progression.

Role and function of cytokines in metabolic syndrome

The correlation of chronic inflammation and obesity in the absence of overt infection or well-defined autoimmune processes is a puzzling phenomenon and inflammasomes, which are implicated in recognizing certain nonmicrobial originated ‘danger signals’, have been associated with this correlation leading to secretion of interleukin-1b (IL-1b), a pleiotropic proinflammatory cytokine that is classically upstream of IL-6 and TNF-a. Recently it had been shown that mice genetically deficient in Toll-like receptor 5 (TLR5), a component of the innate immune system that is expressed in the gut mucosa and that helps defend against infection, exhibit hyperphagia and develop hallmark features of metabolic syndrome, a group of obesity-related metabolic abnormalities that increase an individual’s risk of developing type II diabetes and cardiovascular disease. These metabolic changes correlated with changes in the composition of the gut microbiota, since of the gut microbiota from TLR5-/- mice to WT germ-free mice conferred many features of metabolic syndrome. Food restriction prevented obesity, but not insulin resistance, in the TLR5-/-. These results suggest that the gut microbiota contributes to metabolic disease and that malfunction of the innate immune system may promote the development of metabolic syndrome. Importantly, serum IL-1b levels were also elevated in TLR5-/- mice. Interestingly, in our mouse models of adenocarcinoma in mice with specific epithelial overexpression of IL-1b in the pancreas, stomach, or esophagus, we observed increased body weight suggesting metabolic syndrome. Besides elevated IL-1b serum levels these mice demonstrated highly elevated levels of serum IL-6. IL-1β–deficient mice have improved glucose homeostasis, consistent with previous studies linking IL-1β to insulin resistance. Our studies should analyze the precise mechanisms that link IL-1b to metabolic regulation.

Please send your applications by email.